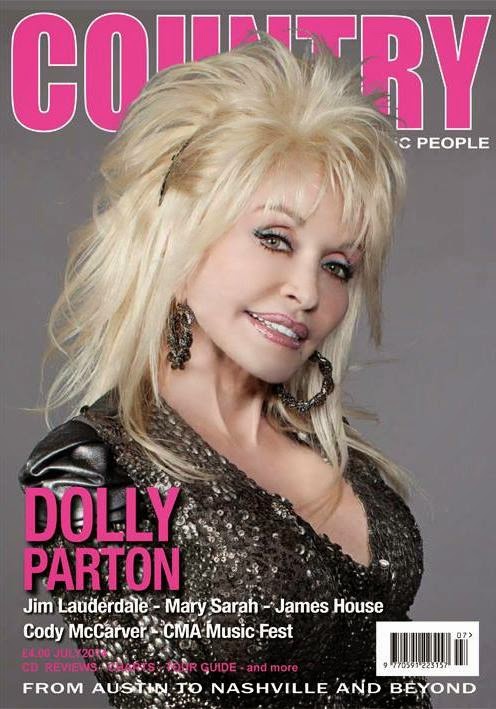 I thought my fans would have fun reading an honest review of my music.  Duncan Warwick is a CMA award winning journalist and works for the British publication Country Music People.  I am truly honored that Duncan took the time to give my music a review and that he gave constructive criticism to what I'm doing as an artist.  Honesty is an amazing thing! And yes I'm featured in a magazine with Dolly on the cover!!! So here ya go....

__________________________________________________
Review by Duncan Warwick--
I guess you could argue that the name ‘Honky Tonk Dave’ tells you all you need to know.  His name is Dave and he sings honky tonk. More accurately, he likes to write and sing new songs in the classic honky tonk style, and he does so brilliantly. Think Tom Armstrong meets Dave Cox and you’ll have a good idea of what to expect. The trouble is, there’s another singer called Honky Tonk Dave already out there, but he seems to sing in a ruba-dub-dub in Enfield, plays the old Joanna (cor blimey!), and is the epitome of a pub singer, which just goes to make it all the more difficult to find out much about the Nashville based singer responsible for this terrific CD.

‘Dave’ refers to himself as ‘HTD’, and I’ve still no idea of his real name, but most of the songs are credited as HTD cowrites with various people with the surname Parks.

Willie Nelson said that “If a song was ever good, it’s still good” and that’s kind of the theme of Song From Yesterday. Dave wants to go back to a time when “every jukebox knew the sound that twin fiddles made” and does so brilliantly on this Crazy Armsesque opener that will have you hooked after about three seconds.

The whole album has a retro feel, whether it’s the Buck-ish Love, Love, Love, the wonderful old-style waltz of Fanny, the swing of May Take All Night Long, or the Haggard inspired Merle, My Hats Off To You.

Another highlight is The Ballad Of Honky Tonk Dave in which he extols the virtues of four chords and his rusty old Ford, and how he was raised on Faron Young and George Jones while his friend’s rock and rolled through school. Drag Strip Boy meanwhile has a truckin’ feel, and really the only track that didn’t completely work for me was the Willie Mack song Cool Sunglasses, which I realize was supposed to be fun but came out way too cheesy.

Personally, I feel that if you call yourself Honky Tonk Dave it cheapens your product in the minds of prospective purchasers, and might even suggest to them that as an artist you are not taking this very seriously. I had some fun thinking up names for some other artists that would describe their sound – like Bad Rock Jason, Gone Completely Pop Taylor, Precocious Little Hunter… you get the idea and I’m betting you could come up with some of your own. However, what matters is what’s in the grooves, and I like that very much. So much so that this is already a contender for the best of the year list. Bad name, really great record.
4 1/2 Stars
Duncan Warwick
http://www.countrymusicpeople.co.uk/
Posted by Dave Parks at 1:24 PM